You are here: Home / Discover the Island / Touring the island / North Route

A tour round the north of Lanzarote creates a host of scenic postcards. The island has many contrasts and due to its varying outlooks it allows for a forever increasing geographical area. The island is known to have the highest vegetation rate especially in the municipality of Haria such as the charming villages of Maguez, Guinate and Tabayesco. You can also enjoy the panoramic viewpoints of Ye, Guinate and el barranco de Tenegüime. On the other hand the north of the island hosts major art interventions created by the great artist Cesar Manrique, for example; Jameos del Agua, Cueva de los Verdes, Mirador del Rio y Jardin de Cactus. Here it is possible to see the obvious change in climate between the centre and south of the island. 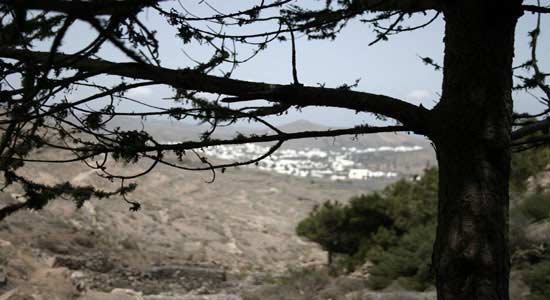 The prevailing trade winds constantly collecting, but does not prevent us from enjoying some of the best bathing beaches in Lanzarote: Charco del Palo in Mala, the bathtub Guatiza o The Coconut Caletones of Órzola. The bay continues to give meaning to life lived in the old fishing villages like the case of Órzola. 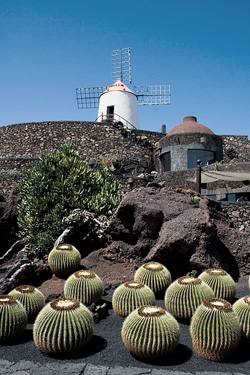 There is plenty to see. Therefore, we will guide you in a schematic form to those that have been designed by Manrique describing you the most outstanding attractions that can be visited whilst visiting the island. Among the villages of Gautiza and Mala (northeast of Lanzarote) you will come across the Jardin de Cactus. Within its five thousand square metres there are more than seven thousand and two hundred animals of which are over one hundred thousand different species originating all over the world.

Don’t forget to visit the wonderful views of the villages Gautiza and Mala, framed in an environment characterised by extensive agricultural plantations known as cactuses. In this north eastern cove we would like to recommend to very popular swimming areas: Charo del Palo (a peculiar nudist area) and el bañadero of Gautiza (a residential community on the east of the village itself).

A ten minute drive from Mala and you will reach Arrieta. It has a nice beach called La Garita and some of the best restaurants that cater with fresh fish. The most visited being that of Amanecer. From Arrieta we would suggest that you head northeast towards Jameos del Agua and Cueva de los Verdes. These are two of the best visiting attractions on the island by Manrique, a certain must.

From Cueva de los Verdes heading towards Haria and then onto the magnificent valley of las mil palmeras (a thousand palm trees) you will see another side to Lanzarote. The island changes from appearing dry and thirsty to a fresh green garden with various plantations that surround the neighbouring towns of Maguez, Gallo and Guinate. Haria stands out for its rich architectural heritage. If you take this route from the north of Lanzarote with children on board we would like to recommend a visit to the tropical park of Guinate. Here there are thousands of species of animals that would bring great delight to every child. To reach it you must take the road towards Ye, a small village nestled at the foot of the volcano Corona. This volcano is very extensive and has access that allows you to bathe on the entire northeast strip of the island. It is one of the most unique views on Lanzarote and even more valuable when contrasted with the white coastline of Orzola.

Within the vicinity of Ye you will find Mirador del Rio. This is also a project of Cesar Manrique consisting of a balcony overlooking the sea, one of many characteristic features on the north of the island where it is possible to overlook the Chinijo Archipelago. From here you can see the small collection of islands that are just over a mile northwest of Lanzarote. These islands comprise of La Graciosa (the only inhabited), Montaña Clara, Alegranza and los roques del Este and el Oeste. This is a naturally protected area that is popular in marine biodiversity. The views are simply astonishing and will stun those visiting. 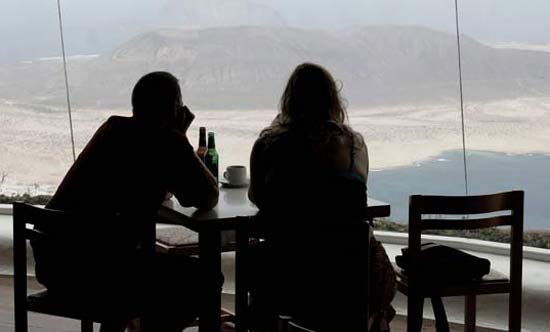 From the top of Ye we would recommend that you take the back roads on to Orzola heading through the volcanic scenery. The fishing village of Orzola is a key connection to La Graciosa. Around its port there is a fresh fish flavour environment. Again it is another great place to enjoy a good fresh piece of coastline fish accompanied with traditional wrinkled canarian potatoes and mojo sauce. We would like to recommend a favourite of ours Perla del Atlantico. For the children there is an educational tour just on the outskirts of the town called Las Pardelas and to finish your visit you could take a swim in the cove of Los Caletones.