You are here: Home / Discover the Island / Touring the island / South Route

Do not miss: Timanfaya and Papagayo.
Where to eat: fresh Pescadito shoreline in Casa Pedro (Playa Blanca) or tonare (The Gulf), traditional Canarian cuisine at La Bodega de Santiago (Yaiza) and Gregory House (Uga) and International cuisine with exceptional value for money Aromas Yaiza (Playa Blanca).
A dip: The Charcones Papagayo (Playa Blanca).
For shooting: The Ajaches (from Femés) Pool of the click, Hervideros, Salinas Janubio.

The sightseeing tour through the south of Lanzarote is known worldwide as the route of the volcanoes. The terminology reflects the magnificence of Timanfaya (southwest), one of the most visited Spanish national parks. On the southern coastline you will notice the vastness of Los Ajaches that adds to the nature of Timanfaya. On its southernmost geographical point you are sure for sun and sand. Papagayo has one of the best sets of beaches in the Canary Islands. We suggest that you begin your route in the south of Lanzarote by visiting the capital of the southern district, Yaiza. Here you will come across fine architecture such of that as Teguise and Haria and one that has preserved its principal hallmarks. It is an extremely quiet village, is immaculate and with thanks to its red gravel decoration, its rustic postal image is of indisputable value. 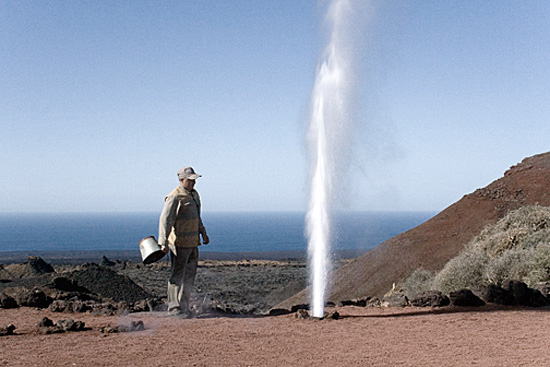 From Yaiza it is possible to see the exquisite figure of Timanfaya. Las Montañas del Fuego have been formed by volcanic eruptions that have occurred in Lanzarote between 1730-1736 and then later in 1824. Its volcanic landscape covers approximately 51 square metres. It would seem ridiculous to travel to Lanzarote and to not take the opportunity to visit this natural beauty. With thanks to the artist Cesar Manrique, Timanfaya is a well-known tourist attraction. To reach your destination you must continue along an approximate road stretch of 14 kilometres and within the vicinity of the restaurant El Diablo you can enjoy some truly fascinating geographical phenomenon’s (more details). 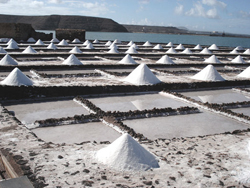 Heading always in a south-westerly direction you will reach Los Hervideros. For more than two centuries since the eruption of Timanfaya, the wild rocky coast has reshaped and moulded with accordance to the rapid cooling of the lava upon contact with water, combined with the erosive wave action resulting in a unique costal landscape. The underwater caves and secluded morphological coves combined with the ferocity of the sea, creates a magnificent sight. 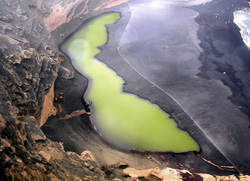 Meanwhile the Charco de los Clicos is a serene green lagoon situated in the middle of a black sandy beach located in the fishing village of El Golfo. The lagoon consists of filtered sea water of intense emerald green. It has a curious coloration due to its amount of accumulated algae known as ruppia maritima. From this point we suggest that you cross the southern part of the west (El Golfo) to the east. We recommend that you take the route towards the mystic village of Femes via the secondary route from Las Breñas.

This is one of the highest points of the island at approximately 600 metres in altitude and is located in the heart of Los Ajaches. A beautiful architectural haven as that of the town of Yaiza, and very well preserved. From this viewpoint you can see a complete over view of what you have visited on the island. Timanfaya and Salinas de Janubio and forthcoming places of interest which are: Papagayo and the neighbouring islands of Fuerteventura and Lobos. Femes is known for its excellent food cuisine, homemade cooking in Casa Emiliano has a very good reputation. 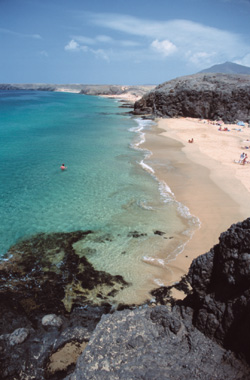 The journey to the beautiful coastline of Papagayo when taking the road of Maciot takes about 10 minutes. This cove is approximately a mile long and consists of five different beaches along the southern border of Lanzarote just on the outskirts of the tourist resort of Playa Blanca. No matter which you choose, Mujeres, El Pozo, Caleta de Congrio, Puerto Muelas or El Papagayo all are the perfect havens for sun and sand. Papagayo´s waters are of extreme quality, its transparency and intense turquoise colour gives it that Caribbean feel. Overlooking the island of Lobos and the neighbouring island of Fuerteventura, the landscape image is of great beauty. The south of Lanzarote almost always benefits from great weather, the sea is calm, there is little wind and the sun is shining. The same as with Timanfaya, to visit Lanzarote and to not visit this precious coastline would seem ludicrous, an overwhelming bay not to be missed. 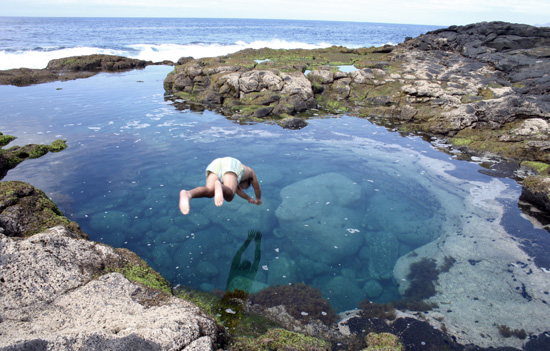 After a visit here you are sure to have worked up an appetite! Playa Blanca has a wide range of cuisine. Enjoy an international cuisine in Casa Brigida which is located in the Marina Rubicon or why not try Casa Pedro situated in the heart of Playa Blanca´s promenade. We would also recommend Aromas Yaiza. Located in the old fishing village of Playa Blanca and offers a varied international cuisine menu at an exceptional price. After lunch is you are fancying another dip we suggest that you move westwards approximately 3 miles north of the Pechigera lighthouse where you will encounter the pools of Los Charcones (top).