You are here: Home / Discover the Island / Towns & Municipalities / Arrecife

With nearly 60,000 inhabitants according to the latest census, Lanzarote’s capital city is the commercial and administrative centre of the island, located on its eastern coast. The most attractive part of the city is along its seafront, which features its most historical sites and buildings, such as the historic compound known as Castillo de San Gabriel [San Gabriel’s Castle] (1742), an impressive fort coupled with the legendary silhouette of the Las Bolas drawbridge. 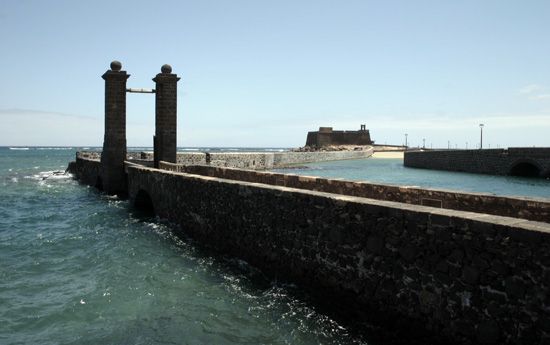 A stroll along the fort will bring you to the Avenida de la Iglesia (from the late 17th century) and el Charco de San Ginés, a small maritime centre which eventually inspired the relocation of the island’s capital from Teguise to Arrecife in 1798. The streets adjacent to Arrecife’s historic district serve as the administrative and commercial hub of the island. The streets León y Castillo (Calle Real), Jose Antonio, Fajardo and the Plaza de la Constitución square, are perfect spots to complement your visit to this coastal city with a snack or a bit of shopping. 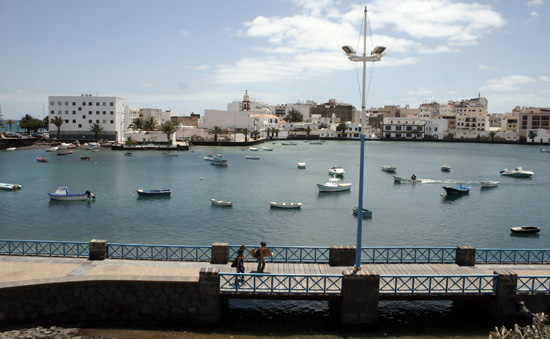 El Reducto beach, along with two of the most notable architectural features of the city, the Arrecife Gran Hotel and the Islote de Fermina, are also great spots for a stroll along the beach or sightseeing. Paradoxically, the city hums along without much notice taken of the spectacular marina. Likewise, it’s unfortunate how several highly valuable spots such as the Islote del Frances and the old fishing centre of franja de Naos to the northeast of Arrecife, are still not appropriately maintained architecture-wise and therefore not fully enjoyed by visitors of the city. 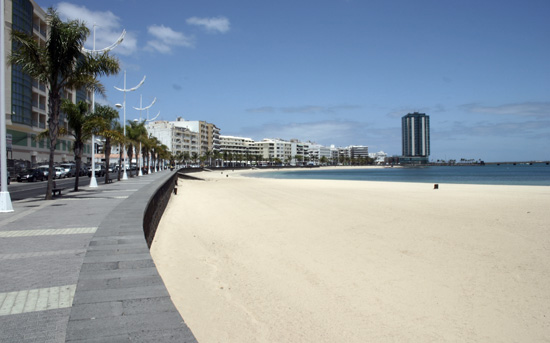 What to do in Arrecife

— Culture. City festivities in honour of Saint Gines take place on August 25th. During the month of August, San Gines Lagoon and the Arrecife fairgrounds host numerous cultural activities. In recent years during the month of April, the Malpais Festival has become a cultural highlight. El Almacén Center for Island Culture, the International Museum of Modern Art, the island’s theatre and other smaller venues host the island’s main cultural events. In the Ocio Today section you can find more information. Arrecife has two cinemas, the spectacular Atlántida del Charco de San Ginés (multicinema with five theatres) and the Buñuel theatre at the El Almacén CIC, which offers alternative cinematographic selections of films in their original language with Spanish subtitles. The films playing are constantly updated with their respective plot synopses, trailers and critiques at film show times section.

— Nightlife. Arrecife nightlife centres primarily around Calle José Antonio, some 200 yards [200 m] from the beach. The night generally doesn’t get started until around 11 pm. The main bars and pubs close at 4 am. The best among them can be found here.