You are here: Home / What to do / Hiking / Los Charcones-Las Salinas de Janubio

ADDRESSING: Leave a car Janubio Beach and another in the abandoned hotel in Los Charcones, about three miles north of Pechiguera, Playa Blanca. DISTANCE: 10 miles. DIFFICULTY: Medium-High. DURATION: Three and a half or four hours. PLEASE NOTE: Wear appropriate clothing and shoes. Water. Some chocolate and pastries. Hat and sunscreen. Do not forget the phone. Do not trust us with the force of the sea characteristic of this area. Use extreme caution when children or young flock Venes.

The Charcones are located about three kilometers northwest of Faro Pechiguera of Playa Blanca. The start easily identify what to consider two moles of cement along the coast, some 30 years ago, sought to establish itself as a hotel facility. Today, still standing, left, looks pitiful three steps from one of the most attractive parts of the coast of Lanzarote. The Atlantic Ocean violently punishes the west side of the island which, together with the conditions tions geology of the area have created many natural pools. Is not advisable to swim in most of them by the proximity of the sea, but in a few safe and the dip ASOC strong winds prevailing in these bays offer a different day, true. 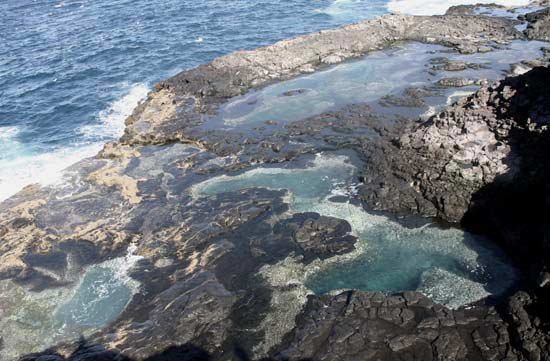 The best swimming pools in our opinion, are a few meters north of the abandoned hotel. Access to them, encouraged to test their water after the path is quite difficult, in a rugged terrain of lava on the decline, but surmountable if we have some minimum physical conditions and pay attention throughout the descent.

The top image is the image that, to the north, will be repeated in the first stage of this walk. The blue sea, the lava solidified in soft shades of black and reddish water from the blue-green charcones in depth. Herons and gulls accompanied the rustle of the waves on the lookout for sea foods at any time, patients may be exposed to their peaks. The road is embarrassed by the flood of volcanic stone that appears to protect the coast. It is therefore convenient, as with any kick, equipped with appropriate footwear for such routes.

The continuation of the kick to the north is a clear example of institutional neglect of Lanzarote in the care and pampering they deserve these routes. A lack of information in all paths, except Femés-Playa Quemada, the road north to Salinas de Janubio seems disorganized desolate wasteland, more like more hopeless than hidden wonders like spaces with very look again soon. Among the eviction will be saved lift and support this view, which appears majestically Natural Monument of Los Ajaches, the strange vegetation in these moors, the skeletons of the roots of trees that could never take flight because of high winds and multiple tracks model citizens who kicked in the area (beer bottles, bags, bangles, shoes …).

Back to the coast, past and when kicking, the water breaks occur at about 20-30 feet from where the waves break. Observe how the foam broke and bathes the surrounding terrain is a spectacle. Another curious phenomenon that occurs in the area is to check how the water enters underground caves and emerge through a spillway meters above (see photo below). The image is added to the loud noise that accompanies the removal of excess water in the cave. This is a good place to recharge your batteries and relax with the exhilarating sound and picture output.

Returning to the path to the north, always north of the trail in this proposal, we will continue looking at these baths that cool the lava solidified by the tremendous power of the waves. You have to envision the strategic point indicated for these breakers in safety. Waves of five or six-foot break in a small decrease in the lower end of rock and embark on a rollercoaster ride until stamped with volcanic violence in a wall about ten meters high. The picture below speaks for itself in this kind of water as usual fireworks in the area. 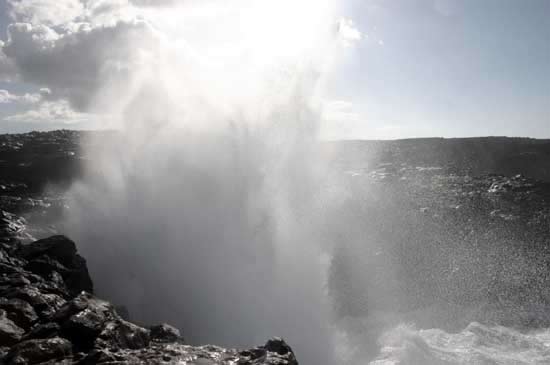 After the storm is always calm. The wave leaves a trail of water that forms the image is so curious and relaxing (see photo at right). With wave series can enjoy a few good fireworks want. Yes, insisted that before we see them choose a good site, which we are sure that water does not pass to avoid greater evils.

About two hours north kicking approach the final stretch of this trail. We turn next to the water plant south of Janubio Inalsa, we, therefore, a few kilometers from the black beach of Las Salinas Janubio. In this area it seems that the sea was quiet, and the road is much more agile. Today (Sunday, December 2, 2007), the always restless Janubio Beach maintains a relative peace, there is much movement of tourists and the back of the pl aya appear peaceful salinas Janubio salt. Three hours of walking. Stop. There’s our car. Are we going to the swimming pools at abandoned hotel, and we take a swim or throw in the Gulf and for wiping out a mere seven? There are thirsty and hungry. 10 minutes after we tested the response: six beers, a bottle of still water, house salad, potatoes with mojo red and green, fried calamari, macaws and red porgy to three (the other seven was merely to too much of this … too expensive). No doubt a different Sunday. 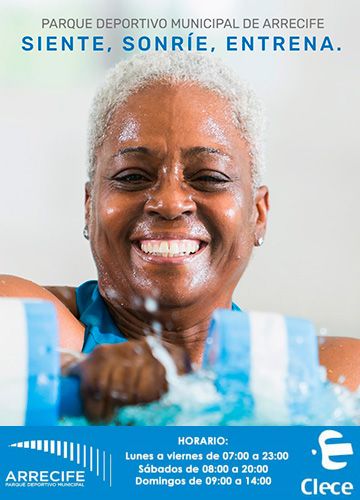