You are here: Home / What To See / Museums / Aeronautical Museum (San Bartolomé)

“Who, who was not taken for a madman or fool, would be able to tell our parents that we would go by plane to Las Palmas in the short time of one hour?”, Melquiades, old times, new times, published in Forecasts (06-07-1946)

From Junker 52, Iberia descacharrado the supersonic Concorde. From the tiny military base as a place of welcome to the four existing terminals. From Junker off two passengers on that flight 52 Opening June 12, 1946 to over five million passengers annually by hovering around Lanzarote Airport today. This is the resulting picture of the museum built by Aena in units of the first inlet to the island by air. A journey through the history of Lanzarote airport surface that provides a strong statistical and graphic account of the profound changes experienced by the island since the mid-twentieth century. 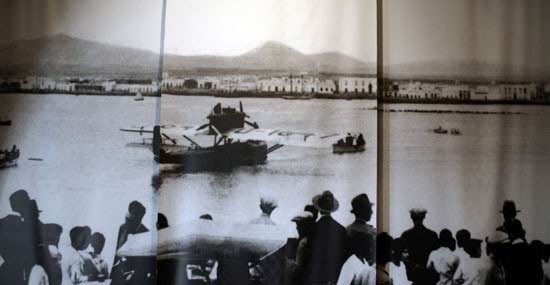 However, before that upholds Guacimeta Lanzarote airport, the locals could enjoy marveling at the arrivals of different seaplanes to Arrecife. The first event in 1919 when French airmen Henry James Roujard Lefranc and were forced to land at the capital’s waters in a tandem-Levy George GL-40. Five years later, in 1924, Ramón Franco, Spanish dictator brother of the future, captivated people Reef (see photo above) with his arrival in the Dornier flying boat in the bay arrecifeña Wall. The marvelous instant, present at the Aeronautical Museum, was the work of Heitz Achilles. 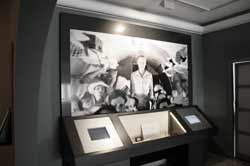 As stated in the citizen Melquiades Forecasts in 1946 (in the quote that heads this information), who was going to say to Lanzarote than 20 years after the arrival of these seaplanes would fly to Las Palmas and walk in an hour Vegueta approx. And after losing the respect and fear, to miracle became air transport vehicle to see the world (like the image on the right, with The crop back to Lanzarote after a show in Las Palmas). The historic photo exhibit also houses the German airship Graff Zeppelin and low flight over the capital of Gran Canaria years before World War II.

The historical itinerary is complemented by the exposure of different materials from Lanzarote airport has been stored since 1946: rudimentary gauges wind speed, ancient telephones, tape, shipping more than characteristic of a fruit of an airport (see photo on left ), several submissions by the charts … Very striking is the involvement of the Cabildo of Lanzarote in the enclosure improvements. From 1948 to 1958 the island institution invested a whopping 411 215 pesetas peseta and 98 cents … also at the time. What money? With the direction of the first cover with dignity Tours: buying carpets, paint for the reception room, paved runway, etc. 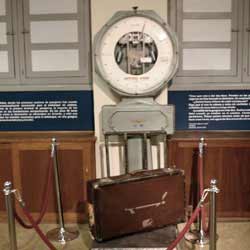 The null expectation of Lanzarote airport maiden voyage on 12 June 1946, contrasts with the importance in the economic and cultural life of Lanzarote today. The Aviation Museum that combines time travel. The huge graph depicting the letter carrier from the Canary Islands today attests to the complex transformation experienced in the archipelago. Be left in the hand of God to form a tourism industry and cost of the first order in just half a century. A revolution that is well reflected in the museum’s audio-visual, with the voices of the main protagonists of that little old airport site in Lanzarote in the mid-nineteenth century.

Despite its historical character, the Aeronautical Museum contains many elements entertainment for children and adolescents. Photographs and models of the evolution of the airplanes that have crossed the sky from Lanzarote (see photo above right) are showing that intergenerational perspective.